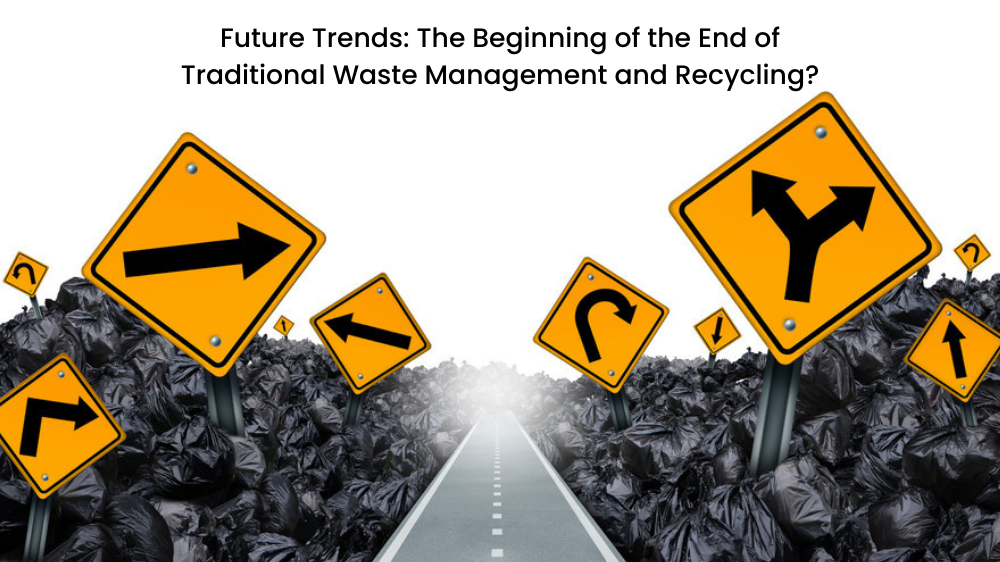 Every day we hear stories about the impact of the 4th industrial revolution, new technology, disruptive innovation, and circular economy in our lives.  Waste management and recycling have traditionally been a “static” industry, as changes were usually small and incremental. However, this pace of change is likely to accelerate, and we should be ready to recognize and be prepared for technology trends that will change waste generation rates, location, and processing methodologies. Below are some possibilities to consider

Decentralization of waste generation and closing the loop

Technology innovations such as e-commerce websites, GPS tracking, and WhatsApp have made shopping at home easier. We order online, and items are delivered in the comfort of our homes at a time of our convenience. Because of the nature of delivery, packaging material tends to be more for online shopping compared to traditional brick and mortar shop purchases. The same for online food delivery. In a restaurant, one gets food served in reusable crockery, but with online delivery, food is delivered in plastic containers, together with plastic cutlery. As a result, both residential waste generation rates and waste composition types are likely to change. Simultaneously, we have the advent of 3D printing. As 3D printer prices drop and technology becomes simplified, we are likely to see the massive proliferation of these devices in homes. They could become a common standard in homes like a TV or fridge.  What is the link between 3D printing and e-commerce? Closed-loop. Closed-loop is the foundation of the circular economy, whereby a waste output from 1 process becomes the recycling input of another process.  3D printers used to require virgin material as inputs. However, 3D printers, using either recycled input material or incorporating an ability to incorporate a mini recycling system, are being developed and tested. Once they are effectively commercialized, users could use a variety of inputs, for example, packaging waste, for these 3D printers to make what products they want. As a result, we could see the decentralization of waste generation, and reduction/elimination of waste streams from these decentralized locations.

Many day-to-day financial transactions generates quite a bit of paper. Examples include ATM transactions, credit card till transactions, shopping and dining invoices, etc. These tend to be small in size, in odd shapes, and generally do not get sent for recycling. Contactless payment, blue tooth technology, email account linkages, and SMS notifications, are in their own way reducing these waste streams. Major banks, for example, enable one to receive an email receipt for transactions as an alternative for traditional printed receipts, and many firms are recognizing an e-receipt as being like a paper receipt for accounting and documentation purposes. As a result, as we adopt a “paperless” system, it is a matter of time before this particular paper waste stream is eliminated. At the same time, the increased use of technology is going to create new waste streams. An example is an electronic waste (e-waste). Like plastics which started at the periphery of usage, and then became mainstream, e-waste will follow the same trajectory. Interestingly though, the question is whether this new e-waste stream will really be waste? The level of toxicity in materials used in electronics is reducing, and producers making conscious efforts to ensure electronic products can be recycled effectively, and efficiently, through product design and applications of the latest material science technologies. E-waste companies may transform from an industrial classification of recycling to one of urban mining. Traditional mining, for example, rare earth, gold, and copper ores, has its associated environmental and social issues. An urban mining e-waste facility does not – provided it uses the correct technology to process.  99% of the materials recovered from electronic waste has a use in some other industries ranging from rare earth to precious metals to non-ferrous to plastics to glass etc and therefore can provide similar substitutes for raw materials usually provided by traditional mines. E-waste will, therefore, soon be an example of a “closed-loop waste stream”. Battery recycling is also another example of a creation of a new closed-loop waste stream.

AI, Robotics and the possible end of the traditional waste to energy plants

We now see robotics being developed and used in multiple applications such as recycling lines, home cleaning, and street-cleaning. Add in the artificial intelligence and machine learning element, and these robots will be soon able to do source segregation as they pick up the material. If this happens, instead of going for final disposal, these materials could be sent to recycling facilities for conversion into other products. This would reduce the input feedstock for traditional waste-to-energy (WTE) plants such as incineration, multi-fuel, refuse-derived fuel, etc. The attraction of these WTE facilities is they combine the twin objectives of ensuring waste is disposed of properly and generating power from waste received. The financial viability of these WTE plants is dependent on the tipping/gate fee for waste disposed of and the sale price of output power. This is especially important as WTE projects have 20 to 25-year project financing. In theory, the reduction in tipping fee volumes could be offset against a higher power output sale price. But this is where another technological innovation comes in – renewable energy. Prices of renewable energy have dropped dramatically over the years, and today, they are substantially lower than traditional fossil fuel / WTE utility power generation costs. However, the challenge for renewable energy has been storage, and with it, reliability and consistency of power generation. In a WTE plant, the waste bunker becomes the “input fuel storage” area, enabling it to generate power as and when required. Renewable energy, such as solar panels, didn’t have that advantage. Until now. Technology has made large battery power storage farms a reality, and thereby eliminated the last major competitive advantage that WTE/ fossil fuel plants had. As a result, over the new few years, WTE will suffer a double whammy of reduced incoming tipping fee revenue, and reduced output power sale revenue – impacting the long-term financial viability of these traditional WTE plants.

Will the above trends really happen?

It is already happening. High-tech organic composters are an example of decentralized waste generation and closing the loop. Residents put their excess waste into these machines and compost is generated in a short period of time. As the price of these high-tech composters falls, their market adoption rate will increase among households. In addition, some developers who market their projects as being green provide these high-tech composters as standards in new houses. Traditional print photos have now disappeared with the advent of digital photos. Stationery waste in schools has reduced dramatically with the heavy adoption of IT / laptops/ iPad by students as part of the learning curriculum.  The above are examples of waste streams being eliminated. Artificial intelligence is being used for predictive analysis of waste generation and composition breakdown by equipment suppliers to build facilities of the future, and by urban planners to plan cities of the future.  Thanks to the advent of awareness/knowledge drivers such as social media and search engines, adoption rates of new technologies, as mentioned above, will increase, and at a faster pace than ever before. Are we in the industry prepared for this future scenario? I hope so. Those businesses who do not prepare for this change, run the risk of being eliminated – just like one of the waste streams mentioned above.