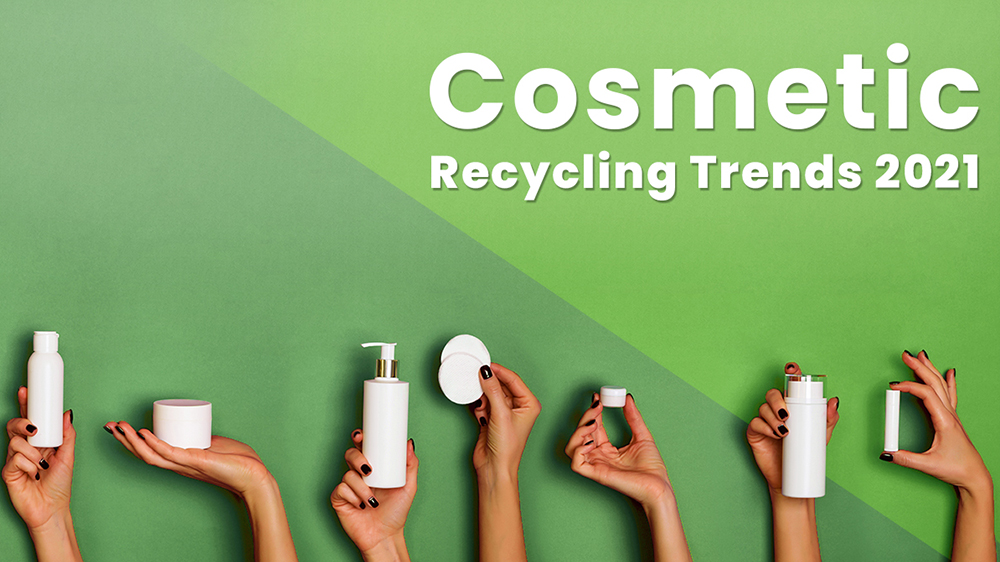 We live in a world that is doomed to collapse if nothing is done to minimize the harm, we are causing the environment. It might not be a conscious choice on our parts, but our lifestyle has affected the climate and environment, nonetheless. If we think about the beauty industry alone, they have contributed to such a significant percentage of waste. But thankfully enough, they have realised it and taken a seat behind the wheel to take control over the situation. Mostly working on the recycling and the eco-friendly aspect of their brands, these companies are looking at a more sustainable way of development without having a hugely negative impact on the environment.

Let us take a close look at some of the top cosmetic recycling trends for the year 2021!

Paper-Based products Are the New “IT”

It is estimated that the beauty industry alone makes a huge contribution to more and more non-biodegradable waste in the environment which can’t be recycled. There is heavy use of plastic in the industry because of the packaging choices that they make. So, brands are taking more caution now to reduce this waste. Brands like Lush have reduced their use of plastic to the bare minimum. They are even trying to experiment with no labelling at all!

Brands like L’Oreal announced that they will be using a paper-based tube! This is a major decision that the firm took in the year 2019 and they promised that more such tubes would be in the market by next year. This will most definitely have a huge impact on the goal of using less and less plastic, and given that they are mass- produce, think of the outcomes this decision will achieve!

Doesn’t matter how hard one tries to, one cannot do away with all the plastic that we use in our lives. Keeping the negatives aside, one reason why plastic is so widely used is because of the convenience that it provides. But then, what do we do about the negative effects that we just put aside? Well, why not use plastic bottles or tubes that are recyclable? And that’s what they did!

Unilever produced black plastic products that are recyclable! Lead to End Waste Now. Originally, it was quite difficult because the technology could not detect the “carbon black” used for colour. But they optimized their technology to reuse the pigments that are found in these bottles by automatic optical sorting machines. This infers that tonnes and tonnes of plastic bottles can be sent back for recycling! After their declaration, they also claimed that they will make sure that this technology is accessible all around the market for universal adaptation.

Everything’s Fun with A Balloon!

Another creative way for an eco-friendly packaging technique is the balloon-based solution that’s been doing rounds in the market. Adopted by a South Korean firm, Innerbottle, they started a campaign back in the year 2019 for using balloons made of silicone as an alternative to using plastic as a containing tube or bottle.

These balloons are BPA-free and are placed inside paper bottles at first. These are then attached to the pumps and can be dispensed after use! Then you can recycle your paper bottle as much as you want using the same technique. This product works whether the cosmetic is in soap or spray form. What more can you ask for?

After being pumped out of the bottle, it only leaves a residue of merely 2% as compared to the earlier 30% when different packaging formats were used. This helps the consumers in more than just one way. Not only do you get more products, but you can recycle the balloon as well!

The Use of Paperboard Tubes

The use of paperboard tubes is another way that one can reduce plastic consumption which will benefit the environment. A packaging company called Stora Enso in the year 2019 decided to go plastic-free by using tubes made from paperboards that were grease resistant.

This technology is most suitable for skin creams. The company also claims that the use of paperboard instead of plastic has reduced their consumption of plastic as a firm to 30%. Their main motive is to set an environment-friendly trend that will help initiate climate-friendly solutions in terms of packaging across the industry. Their goals are to go as far as they can in terms of sustainability.

Another very innovative way of replacing plastic is by using bottles made of soap and beeswax instead. Interesting concept, isn’t it? This interesting concept was put to test when in 2019 Mi Zhou, a graduate of the University of Arts London, introduced a sustainable way to package products. A range of toiletry bottles was developed then which can be discarded completely by melting when no longer in use.

The packaging technique is called Soapack. Through this packaging, one can make soap out of vegetable oil and then use pigment dye extracted from minerals and plants which then can be further moulded into the shape of your choice. These can then be boiled over by beeswax that prevents the products from dissolving with the bottle. It’s also waterproof with this method. The bottle can be stored in a dry place before dissolving. This opens an arena of possibilities in the world of sustainable cosmetic packaging.

The refillable packaging is another way of recycling and making the utmost use of a container. Not only is it beneficial for the customer at an individual level, but it also makes a huge deal for companies that are in mass production because with a decrease in demand for more containers there will be less wastage.

These ergonomically designed bottles are of good quality that can stand the challenge of time and contribute to a world where product waste and consumption of harmful plastic is less and less. The durability of the products is an outstanding feature that adds to the amazing qualities apart from the recyclability and refillability. Companies like Face Packaging are in front of the line for making such products a possibility and not just a suggestion.

Another very effective way of recycling is returning the empty bottles to the companies so that they can recycle the no-longer-needed bottles and stop them from being dumped in the waste. The Terracycle corporations are known for this immensely. Started 15 years ago in the USA, their reach is now around in almost 20 countries of the world. They specialize in bringing back the non-biodegradable wastes and then recycling them.

Cosmetic companies have started campaigns so that more and more of their consumers can participate in recycling. L’Oreal in Australia has free of charge designated stores where one can go to dispose of their empty containers without the compulsion of having to buy anything else. Their contribution is stamped and after getting a minimum of 6 stamps, they are given a complimentary shower gel. Garnier not only takes back products from their line but from every brand and then sorts it out in categories which are then further made into new L’Oreal bottles.

Many companies that specialize in deodorant manufacturing take back empty bottles and then recycle the aluminium. Companies like Henkel started campaigns that took back these deodorant bottles and used them to make children’s gyms, to name one of many. There are other companies as well like Unilever who recycled the aluminium and used it to produce bikes for children with the help of charitable institutions.

Another one in line would be the very popular luxury cosmetic brand Estée Lauder who gives its consumers the option of returning their empty packaging after use. And after they have returned up to 6 such, they are rewarded with a free eye shadow. They don’t themselves recycle the packaging but further passes on to other companies to do it for them.

One more in the line would be an Australian company Ringana. They went a slightly different way by asking their customers to pre-clean the used bottles and post them back to the company. If they could do it with a minimum of 10 bottles, then they would be given a free cosmetic product as a gift. And that product can be of their own choice! The company then uses these same bottles to refill and repackage in an environmentally friendly way.

What Is the End Conclusion?

Big companies and firms as well as many local firms and thrift stores are looking at more and more ways to End Waste Now. This entire campaign of reducing plastic waste and instead of using ways through which recyclability is possible is a trend. Today, people are more and more concerned about the circular economy that befalls us.

Generation Z is an eco-friendlier generation than the past ones that we have seen. So, what can we do at a personal level to make sure that these attempts don’t go to waste? We can start by choosing brands, as part of our routines, that believes in sustainability and has more and more recycling ways as a target to achieve a plastic-free world. Even though a plastic-free world doesn’t seem possible at this point, new and new technology are surfacing that at least reduces the plastic intake and are focusing more on recycling. Contact us today by calling +971 4 346 6185