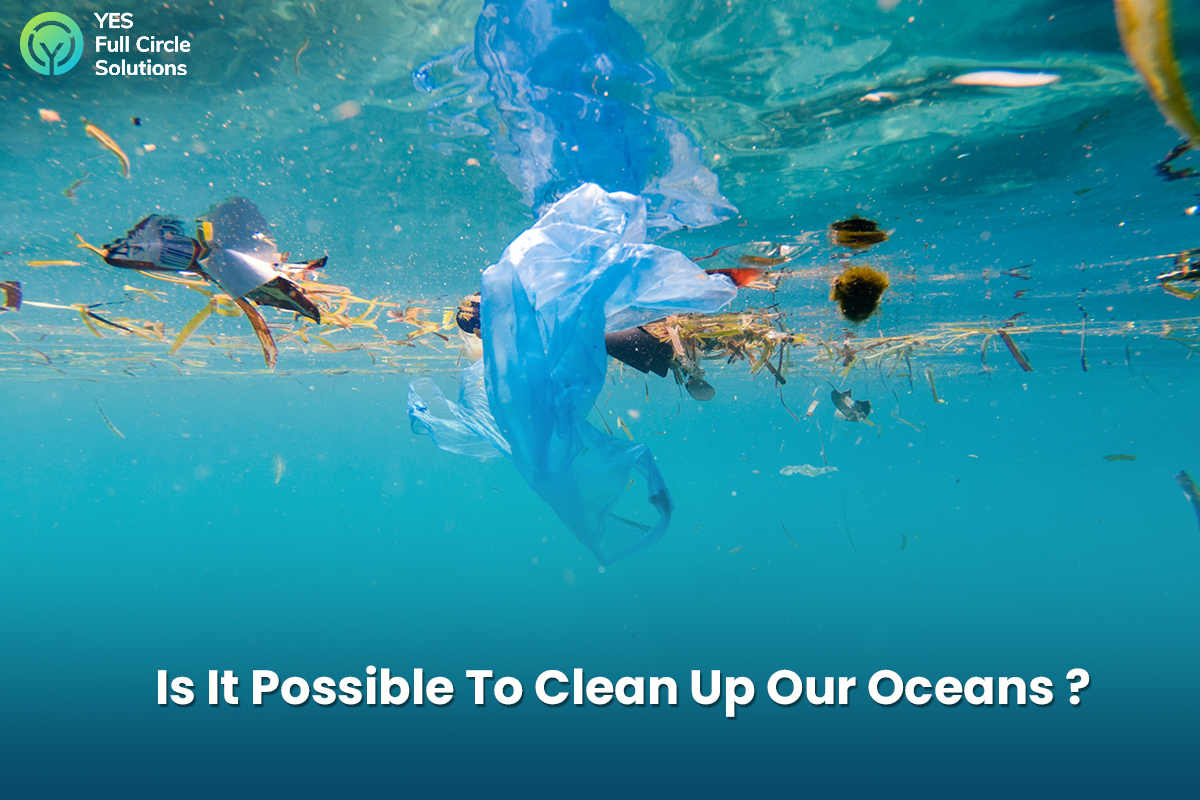 Yes, it is possible to rid our oceans of plastic waste. Ocean pollution accounts for 150 million metric tons of plastics and on top of it, 8 million metric tons of plastics are added annually. Marine life is heavily impacted due to the waste accumulating in their habitat, disturbing a major chunk of the ecological sphere. To address the issue, the ocean clean-up project got behind the task. They have planned to rid the ocean of the waste accumulated within a decade or more. However, if we continue to produce waste at the same rate, it will not help any such projects to come to a conclusion. Moreover, it isn’t a task for one. There are many ways the current technology can enable innovators and entrepreneurs around the world to make this process more efficient and scalable.

How Does Plastic End Up In The Oceans?

Life exists in a complete full circle. Washing your hands might wash away the tiny plastic particles stuck to you from your daily life. The same single-particle from that water might end up coming back to you, one way or another. That is how nature behaves in a domino-effect. Similarly, the waste we produce on our daily basis eventually ends up getting dumped at landfills or rivers. From rivers, the waste is carried with the flow towards the seas and from there the water currants steer it into the oceans. It is estimated that 80% of all the waste in the oceans originated from land. This waste is present in all shapes and sizes. Much of it is not even visible to the naked eye. These are known as microplastics and they can easily leave aquatic life compromised. Therefore, the waste we may discard today is going to come back to us in the face of a marine life crisis. It is for our own sake that we produce minimal waste, and reuse and recycle as much as possible.

All that waste accumulated in the oceans is causing a major threat to marine life. Recent research indicated that the ratio of plastic to plankton in the waters may be as high as 46:1, threatening starvation of fish, marine birds, and mammals that mistakenly ingest tiny pellets of plastic that resemble food. Moreover, due to the plastic debris, many aquatic lives end up injuring themselves as well. That is how marine life is compromised as it dies due to choking and consuming plastic. We are completely unaware of the number of animals & fishes killed due to marine pollution so far. However, experts have observed a sharp decline in the population of many prominent sea creatures. Therefore, non-profit organizations are making efforts to prevent any of them from falling into extinction.

But why is marine life important to us? And why should we be saving them? Mainly because it hosts 80 percent of the planet’s biodiversity, and makes up the largest ecosystem on Earth. If there was no life below water, the ocean will not be able to perform much of its essential functions. With a loss of one of the main food sources, such a situation will lead to a lower quality of life. In many places around the world, people depend upon fish for their daily intake of proteins. Moreover, fishing accounts for a major part of the global economy and if all the fish or 90% of the fish were to disappear, the life on land would come crumbling down.

Cleaning Up the Oceans

It is high time that oceans are cleaned up of the waste we have been carelessly producing. Non-profit projects like ‘the ocean cleanup’ are trying to collect the already accumulated waste and recycle it to produce something of value. However, if we continue to produce waste like we normally do, it will continue to pollute our oceans and aquatic life. Therefore, just as nonprofit projects are doing their part to save the planet, we can play our part on an individual level. We can start by adapting to the zero-waste lifestyle and monitor our waste disposal habits. Reusing, recycling, and reducing should be the motto to lead a sustainable life. And just as the oceans are being cleaned up, we can rest assured that ocean pollution will come to a halt, restoring the habitat of marine life to thrive for our own good.

The efforts of cleaning up the ocean have been successful but they have a long way to go towards actually making a significant impact. The great pacific garbage patch is the world’s largest gyre of plastic waste in the Pacific Ocean. According to Ocean Voyages Institute, 103 tons of plastic waste was collected and removed from the great pacific garbage patch. This is just from a single voyage that took 48 days at sea. Similarly, more voyages will be carried out with a fleet to ensure the task is accomplished in less time and with more efficiency. The garbage collected will then be recycled to produce indisposable products.

The waste collected from the oceans, shall restore the aquatic life to its entirety and allow it to thrive. Taking away the threat of declining coral reefs, we can expect marine life to grow. Once the waste is collected, it can be recycled into raw materials for other manufacturers. That’s where YFC steps in, as it takes the waste to its recycling plant and segregates it into categories for recycling. From there on, raw materials are produced for different manufacturers to create their end-products. Read more about it here.

Such a collective economic effort to eliminate waste and practice continual use of resources enables the circular economy to become effective. Moreover, cleaning up the ocean is just a part of it with a plethora of challenges to actually end ocean pollution yet to come. We have got a long way to go but every goal has a start. Let us make this goal a reality by combining our efforts.